Pruning with a Purpose 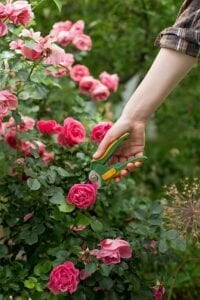 What is Pruning?
Pruning is the practice of selectively removing plant parts (branches, buds, spent flowers, etc.) to manipulate the plant for landscape purposes.
Why Prune?
More important than knowing when or how to prune is to know why and what you are trying to achieve. There are many reasons to prune, including, but not limited to:
1. Accentuate an ornamental feature (flowers, fruit, etc.)
2. Control size
3. Maintain plant health
a. Always cut out dead, dying, diseased or damaged wood.
b. Remove crossing or rubbing branches.
c. Maintain good air circulation within the plants framework.
d. Remove unwanted shoots.
4. Maintain desired shape.
When to Prune?
The right time to prune depends on the type of plant, the desired outcome and the severity of the pruning. Pruning to remove broken, dead or diseased parts can be done at any time of the year. Most trees and shrubs, especially those that flower on current season’s new growth should be pruned in late winter or early spring before the onset of new growth. (March-April). Plants that bloom on previous season’s wood such as fruit trees, rhododendrons and lilacs should be pruned immediately after blooming to maximize the next year’s flowering.
This chart provides a basic timeframe of when you should prune. For additional information, please speak with one of our sales associates. We’re here to help!
February-April
Summer Flowering Shrubs (prune before bud break in spring) such as butterfly bush, crape myrtle, roses, spirea, privet, and some hydrangea.
Fruit Trees Including Figs
Evergreens Including arborvitae, holly, boxwood, juniper, yews.
May-June
Spring flowering shrubs Prune right after flowering such as pieris (Andromeda), azalea, forsythia, rhododendron, Lilac, spiraea (bridal wreath & vanhouttei), Dogwoods, flowering cherry & plum trees, and some Hydrangea.
June-July
Prune when new shoots reach full growth and become woody. This is the preferred time to thin most deciduous trees (shade trees) such as birch, linden, crab apple, maples, oaks, flowering cherry, plum, spruces, honey locust, willows. Prune hedges as needed to retain clean lines.
August-December
Heavy pruning at this time could result in the stimulation of new growth that may not have enough time to mature, making it prone to early and winter frost damage.
This time of year, limit pruning to the removal of dead or damaged branches.
Rejuvenation Pruning & Thinning
• Annually cut away one third of the oldest branches, of mature shrubs, from the base to keep the plant younger and stronger. Maintains good air circulation.
• Timing: late winter/early spring or just after bloom for spring blooming plants.
• For plants that have not been routinely pruned or have been pruned incorrectly, and are now undesirable.
• Not all plants respond to this style of pruning. Check if it has the ability to respond from it before proceeding.
Pruning Tools – Branch Size
• For branches up to 1”, use a bypass pruner
• For branches 1” to 6”, use a saw
• For pruning a large limb:
o Undercut 12-24” up from the branch collar – this stops the bark from tearing.
o Make the second cut from the top all the way through the branch, 2-3” above the undercut.
o The final cut should be just beyond the branch collar.Support the stub so it does not tear the bark. 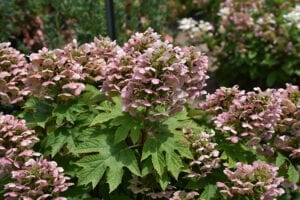 Special Notes about Hydrangea
H. macrophylla and H. serrata: Although these Hydrangeas are considered summer bloomers, they set their flower buds the year before just like spring blooming shrubs.
1.prune early spring just before bud break. Pruning this time of year should be limited to dead wood and thinning practices, NOT for reducing height as These hydrangea do not take well to hard pruning.
2. To control size, prune immediately after blooms begin to dry in mid-to-late July. Waiting until August is typically too late.     One will sacrifice the lovely effect of the dried flowers in doing so.
H. quercifolia and H. petiolaris: Prune right after flowering to control size and shape.
H. arborescens and H. paniculata: both respond well to hard or light pruning.
Special Notes about Hedges
•Hedges should be allowed to get a little bigger each time they are trimmed. Pruning them back to the same “spot” each time will weaken and shorten the longevity of the individual plants
•The shape is very important; the bottom or base should always be as wide or wider than the top to allow sunlight to reach all leaves, and to prevent damage from snow or ice buildup.
Special Notes about Conifers
•Minimal pruning is typically required with conifers and can be done in late winter/early spring, or in late spring/summer after new growth has emerged.
•Only prune up to 1/2 of the new growth.
•One must stay within the youngest (newest) growth. If you cut back to old wood, it usually does not grow back.
•For this reason, remedial pruning typically does not work with Conifers (except for Yews (Taxus)).