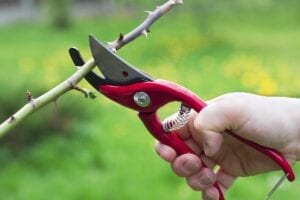 What is Pruning?
Pruning is the practice of selectively removing plant parts (branches, buds, spent flowers, etc.) to manipulate the plant for landscape purposes

Why Prune?
More important than knowing when or how to prune is understanding what you are trying to achieve.

Some common reasons to prune include:

Pruning Techniques
Depending on the plant type and desired effects, routine pruning is necessary in order to optimize the plant’s ornamental features. The following methods outline routine pruning techniques: 1. 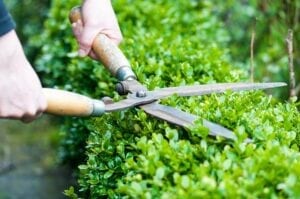 Basic Tools for Pruning
For most pruning projects you will need pruning shears, loppers, or a small pruning saw. Hicks Nurseries carries a great selection of tools for all of your pruning needs.

When to Prune
The right time to prune depends on the type of plant, the desired outcome and the severity of the pruning. Pruning to remove broken, dead or diseased parts can be done at any time of year. Most trees and shrubs, especially those that flower on current season’s new growth, should be pruned in late winter or early spring before the onset of new growth. (March-April). Plants that bloom on previous season’s wood such as fruit trees, rhododendrons, azaleas and lilacs should be pruned immediately after blooming to maximize the next year’s flowering.

*A special note about when to prune Hydrangea: Hydrangea macrophylla (such as Endless Summer). Since they produce flowers on the previous season’s growth, pruning hard typically results in no flowers. Selectively thin in early spring just before bud break in order to control size. Hydrangea arborescens (such as Annabelle) and Hydrangea paniculata (such as Tardiva) both produce flowers on the current season’s growth and respond well to both hard or light pruning. Prune in late winter/early spring before new growth appears. Hydrangea quercifolia (Oakleaf Hydrangea) The flowers are produced on the previous season’s growth. Prune right after flowering (mid-summer) to control size and shape. Only remove up to 1/3 of the plant.

This list provides a basic time frame of when to prune commonly used plants. For additional information, please speak with one of our sales associates.

February-April
Summer flowering shrubs such as butterfly bush, hydrangea*, crape myrtle, roses, spirea and privet should be pruned before bud break in the spring. Now is also the time to prune fruit trees and evergreens such as arborvitae, holly, boxwood, juniper and yew.

June-July
This is the preferred time to thin most deciduous trees such as birch, linden, maples, flowering cherry and plums, spruces and honey locust. Prune hedges as needed to maintain shape.

August-December
Heavy pruning at this time could result in the stimulation of new growth that may not have enough time to mature before winter; making it prone to frost damage. Limit pruning to the removal of dead or damaged branches only during this time.