The annual Giant Pumpkin Contest was held at Hicks Nurseries this past Sunday. The competition, held each 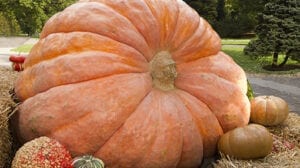 October, invites Long Islanders to bring their own-grown pumpkins, large and small to the nursery for the chance to be crowned the winner and receive the $500 grand prize.

This year was a tough one for many growers. There was quite a bit of rough weather, insects and disease problems. Fortunately we had 5 great entries.

New to the contest was George Boyd of Kings Park. He grew a particularly beautifully colored pumpkin that weighed in at 453 pounds and garnered him a second place win and $300 prize.

Veteran pumpkin grower Scott Armstrong of Commack took first place with a 1,059 pound pumpkin. He won $500 and a plaque as well as a separate statue for growing a pumpkin that weighed more than 1,000 pounds. Scott’s 2013 pumpkin, which weighed 1,456 pounds, continues to be the largest pumpkin ever grown on Long Island.

In the Junior Division, adorable Denny A. returned this year with a 4 pound pumpkin, Leanna M. grew a beautiful 15 pound pumpkin and Marissa & Ava, daughters of Scott Armstrong, grew and cared for their own pumpkin, which weighed in at a whopping 217 pounds.

Congratulations to all of the winners!

Join us next week at Hicks Nurseries for the annual Pumpkin Carving contest. The event, scheduled for October 11th at 3pm, is free to enter and everyone is welcome to participate. Pumpkins must be carved at home and then brought to the nursery for judging. Categories include Funniest Pumpkin, Best Carved Pumpkin, Best Pumpkin Grown by a Child (no help from adults), Scariest Pumpkin, Best Decorated Pumpkin.

Registration begins at 2pm, judging begins promptly at 3pm. The winner of each category will receive a $20.00 gift card to Hicks Nurseries.